When fresh herbs aren't readily available, it can be tempting to swap in dried herbs when a recipe calls for fresh. How well does this work?

In spring and early summer, before your freshly planted herbs are ready for use, it can be tempting to swap in dried herbs when a recipe calls for fresh. After all, they are more convenient and a lot cheaper than buying bunches of fresh herbs from the supermarket. We decided to look into the matter more thoroughly to find out when exactly this swap would be acceptable.

We purchased fresh and dried versions of basil, chives, dill, oregano, parsley, rosemary, sage (in coarsely crumbled and rubbed forms), tarragon, and thyme. Then we cooked our way through 24 recipes (including marinades, sauces, and braises), making each with fresh and dried herbs and comparing differences in flavor.

In all but one application, tasters preferred fresh herbs to dry. Chili was the exception; in this dish, dried oregano was the favorite. A common criticism of dried herbs was that they had lost many of the subtleties and nuances of fresh herbs, tasting “dusty” and “stale.” Meanwhile, fresh herbs tasted “clean” and “bright.” Still, there were a few instances in which some dried herbs, though not preferred, were a passable substitute. In addition to oregano, dried rosemary, sage, and thyme fared reasonably well in recipes involving fairly long cooking times (more than 20 minutes) and a good amount of liquid.

The principal flavor compounds in herbs can be divided into four categories: hydrocarbons, aldehydes, ketones, and phenols. Some of these compounds are stable, which means they don’t change at high temperatures and thus are able to maintain their flavor even through the drying process and cooking. Other compounds are volatile, meaning they are fragile and therefore are easily lost under those same conditions. The flavor compounds found in delicate herbs—basil, chives, dill, parsley, tarragon—tend to be more volatile, hence the fresh form always performs better than the dried. In contrast, the dominant flavor compounds in the herbs that work acceptably well when dried—rosemary, oregano, sage, and thyme—are nonvolatile and better survive drying and cooking. Dried herbs are best used in recipes with ample liquid because moisture will hydrate their cells, which makes them porous and able to release more of their aroma compounds. But even in circumstances ideal for dried herbs, they will always have a slightly dusty, stale flavor because the drying process leads to oxidation.

When a recipe calls for delicate herbs, it’s best to stick with fresh (as well as in all recipes that use herbs raw or to finish a dish). However, if a recipe calls for hardier herbs such as rosemary, oregano, sage, or thyme, their dried form can be an acceptable substitute. Just keep in mind that ounce for ounce, dried herbs are more potent than fresh. Our testing—in which we used only newly purchased jars of herbs—indicated that using 1 part dried herb to 3 parts fresh came closest to producing flavors of equal strength. 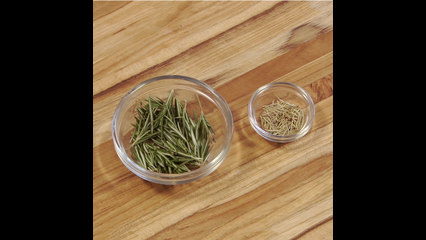