The Science of Cooking Frozen Steaks

Conventional wisdom holds that frozen steaks should be thawed before cooking, but we wondered if steaks could be cooked straight from the freezer.

We cut a strip loin into eight steaks, cut each steak in half crosswise, put the pieces in vacuum-sealed bags, and froze them. We then thawed half of each steak in the refrigerator overnight and kept the other half frozen. Using our preferred method, we seared both sets of steaks in a hot skillet for 90 seconds per side and then transferred them to a 275-degree oven until they reached 125 degrees, or medium-rare, on an instant-read thermometer. To track moisture loss, we weighed each steak before and after cooking.

A fully frozen steak is extremely cold, which prevents overcooking while the surface reaches the very high temperatures necessary for browning reactions. As for the difference in moisture loss, we know that when meat is cooked to temperatures higher than 140 degrees, its muscle fibers begin to squeeze out a significant amount of moisture. As its slightly thicker gray band indicated, the steak that had been thawed had more overcooking around the edge, so it made sense that it also had greater moisture loss.

While we prefer to start with steak that’s never been frozen for the best texture, if we do have frozen steaks on hand, from now on we’ll cook them straight from the freezer. Freeze steaks, uncovered, overnight on a baking sheet (this dries them out to prevent excess splattering during cooking), then wrap them tightly in plastic wrap, place in a zipper-lock bag, and return to freezer. To ensure that the steaks brown evenly, add oil to the skillet until it measures 1/8 inch deep. And because frozen steaks will splatter more during searing, use a large skillet. 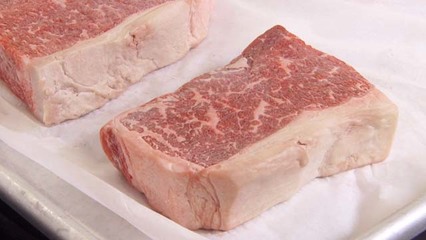