How to Cook Bulgur, Millet, and Quinoa in a Rice Cooker

Put your appliance to work with these three rice cooker-friendly grains.

Rice cookers produce perfectly cooked, fluffy rice because they're programmed to stop cooking once all the water has been absorbed by the rice. To see if other grains that we typically cook via the absorption method could work in this appliance, we cooked bulgur, millet, and quinoa in our winning rice cooker, the Aroma 8-Cup Digital Rice Cooker and Food Steamer. Once we established the appropriate amount of water to add, we found that all three did well in the rice cooker.

Next we tried three grains—pearled barley, farro, and wheat berries—that we normally cook via the pasta method (boiling in an abundance of water that we drain off). In the rice cooker, all three ended up requiring an hour-long presoak in boiling water to ensure that they were fully cooked by the time the water was absorbed—a big inconvenience that also meant the grains took a lot longer to prepare than on the stovetop.

Moving forward, we'll consider a rice cooker a viable option for quick-cooking grains such as bulgur, millet, and quinoa, but we'll stick with the pasta method on the stovetop for denser, heartier grains. (Note: If your rice cooker has multiple settings, choose the white rice option when cooking these other grains.) 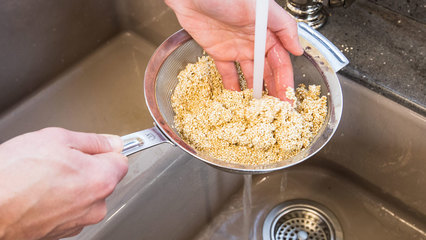